“Gestalt” is a German word concerning “form”, “shape”, or “whole configuration”. The Gestalt theory explains how we organize mental figure-like images and how we perceive images through various types of sensory input such as visual, auditory, and olfactory stimuli. Gestalt psychology provides an important perspective in human perception. The founders of Gestalt psychology (e.g., Wertheimer, Köhler, and Koffka) believe that a perception cannot be meaningfully decomposed into its elementary components. They propose that the basic units of perception are themselves the perceptions?the “Gestalts” (or Gestalten) are the fundamental units. Indeed, the basic Gestalt theme is embodied in the often-applied summary phrase: ‘The whole is different from the sum of its parts; the whole is greater than the sum of the parts’. 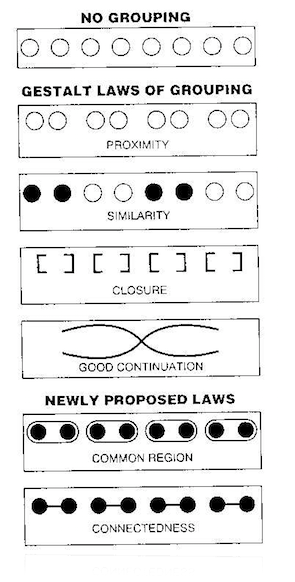 Some more interesting texts can be found here in regard to the Gestalt Laws. An example:

Science will find Gestalten of different rank in different realms, but we claim that every Gestalt has order and meaning, of however low or high a degree, and that for a Gestalt quantity and quality are the same. Now nobody would deny that of all Gestalten which we know those of the human mind are the richest; therefore it is most difficult, and in most cases still impossible, to express its quality in quantitative terms, but at the same time the aspect of meaning becomes more manifest here than in any other part of the universe.

More interesting names to do some research about are the following:

Ernst Mach (1838-1916) introduced the concepts of space forms and time forms. We see a square as a square, whether it is large or small, red or blue, in outline or technicolor… This is space form. Likewise, we hear a melody as recognizable, even if we alter the key in such a way that none of the notes are the same.

Christian von Ehrenfels (1859-1932), who studied with Brentano in Vienna, is the actual originator of the term Gestalt as the Gestalt psychologists were to use it. In 1890, in fact, he wrote a book called On Gestalt Qualities. One of his students was none other than Max Wertheimer.

Oswald Külpe (1862-1915) was a student of G. E. Müller at Göttingen and received his doctorate at Leipzig. He studied as well with Wundt, and served as Wundt’s assistant for many years. He did most of his work while at the University of Würzburg, between 1894 and 1909.

He is best known for the idea of imageless thoughts. Contrary to Wundtians, he showed that some mental activities, such as judgments and doubts, could occur without images. The “pieces” of the psyche that Wundt postulated — sensations, images, and feelings — were apparently not enough to explain all of what went on. 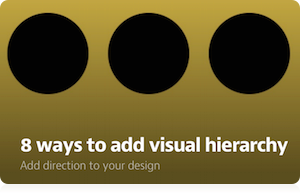 Another nice up-to-date-version which relates fine to this.

Why do I blog this? I want to keep track of helpful principles and ideas to shape, order, and relate stuff. The Gestalt Laws are such a helpful tool.