Really, I am together with my great team members Stanislav, Hannah and Ognen (from left to right; on the right Mr. Thomas Beer, Policy Coordinator in the ESA GMES Space Office)! 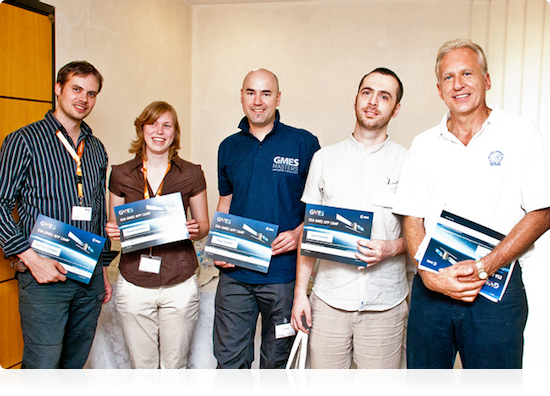 In last years June (17.06 – 22.06.2012) I was for the first time of my life in Italy. I visited the European Space Agency (ESA) together with a lot of european bright heads in app development from all over Europe. This event I was visiting was called the ESA App Camp (see screenshot of website) and it was the first such event for developers ESA ever organized. It was located in Frascati, Italy where ESA has one of its headquarters called European Space Research Institute (ESRIN) and at the same time ESA’s centre for Earth observation.

Work diligently despite the Mediterranean heat to create applications for mobile phones that bring Earth observation and GMES services to the everyday user.

Yes, and that’s actually what really happened. It was absurdly hot (above 40 °C degrees outside). It was packed with mobile devices. Packed with a lot of ideas. And we got the latest and greatest data of earth observation to play with. And hell yeah we also got rockets! I met a lot of new people and tried to make some friends during this really short week that was crammed with new stuff. We got some very good insight into ESA’s operations and its future plans and i.e. the Global Monitoring for Environment and Security (GMES) program by our on site advisor Thomas Beer (who is ESA’s Policy Coordinator) and several other people – most of them scientists – of ESRIN.

During our time there we stayed at the very nice Grand Hotel Villa Tuscolana in the mountains of Frascati. I took the above panorama picture standing in the main entrance doing a 180 with my iPhone right after sunrise (tap on the picture to see the HUGE version). As already mentioned it was quite hot in Italy, so the pool at the hotel was more than welcome, and warm clothing was normally really not needed. Normally! I emphasize that, because I needed some warm clothing for all the AirConditioning going on. ;-) 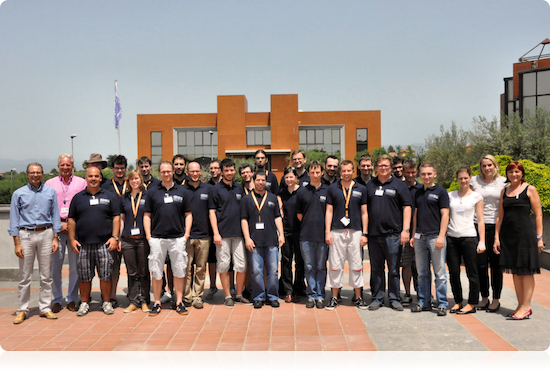 Source: ESA 2012, http://spaceinimages.esa.int/Images/2012/06/App_Camp_participants, shows all participants of the App Camp and ESA staff on site in Frascati

So what happened at this App Camp about you ask? Well, 20 people got a huge amount of input about what ESA is about, what these guys are working on right now, and what they have already prepared for us european citizens and which you will recognize soon as the launch of Sentinel 1, 2, 3, 4 and 5 satellites will happen. If they are labeled A or B there are two of each one to have a backup system ready.

This week was pretty packed. I think the first two days we really got a lot of basic info about what’s going on at ESA and what GMES is and why we are invited to craft some apps and/or ideas. As soon as we had enough info to get an idea about which kind of data would be made accessible for us if we plan to create an app, we were ready to start thinking.

Source: Own photograph; my team members including myself in sunny Italy/Frascati

Stanislav also has a nice blogpost about it with lots of photos!

Update 15.2.2013
There is a new ESA App Camp starting right now with a Call for Participants