iOS is a really nice Operating System. It is light enough to run on a mobile device with limited power yet powerful enough to run even the craziest of 3D game engines. It’s in a way a magically smart OS optimized to be in perfect sync with the hardware. Yet iOS has several things which could be vastly improved.

A lot of these things are annoyances which pile up over time. Think about a curve running along the x-axis at a certain y-value and think about x as the time-axis. As a customer the annoyances just pile up as the area under this curve over time (see following gfx). 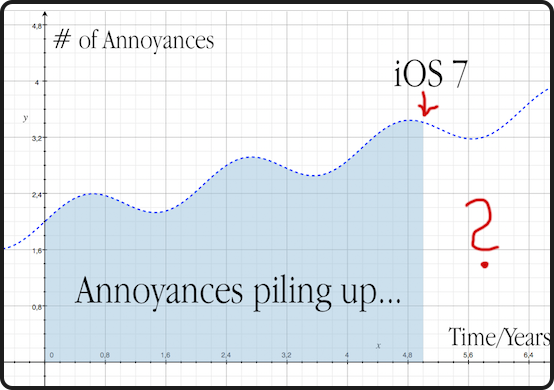 Gfx displaying how annoyances piled up over time
I just want to put up my most important things here to share it with the community and to hopefully inspire engineers at Apple to improve on them.

Stuff which is not so much wanted

These are the most important things I would wish for iOS 7. I would be oh so happy to see these fixed & introduced soon. I will add more stuff as I remember it… to be continued…

Whish Lists of other blogs/sites